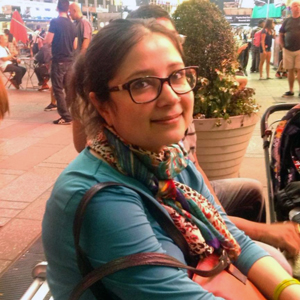 Meheli Sen received her Ph.D. from Emory University’s Graduate Institute of the Liberal Arts in 2008, with a certificate in Film Studies. Prior to this, she received a B.A. in Comparative Literature in 1997 and an M.A. in Film Studies in 1999 at Jadavpur University in Kolkata, India.

Sen has previously taught at the University of Oklahoma’s Film and Media Studies Program and in the College of Communication at DePaul University.

Her research area is post-independence Indian cinema, particularly Hindi and Bengali language films. She is especially interested in questions of gender, genre, modernity, globalization, and new media cultures. Her work has been published in journals such as Cinema Journal, Framework: The Journal of Cinema and Media, LIT: Literature Interpretation Theory, South Asian Popular Culture, among others. She has co-edited an anthology titled Figurations in Indian Film (Palgrave-Macmillan, 2013).

Sen’s book, Haunting Bollywood: Gender, Genre and the Supernatural in Hindi Commercial Cinema (University of Texas Press and Orient BlackSwan, 2017) explores the supernatural in Bollywood cinema, and the varied modes through which it raises questions of film form, history, modernity, and gender in South Asian public cultures. Arguing that the supernatural is dispersed among multiple genres and constantly in conversation with global cinematic forms, she demonstrates that it is an especially malleable impulse that routinely pushes the Hindi popular film into new formal and stylistic territories.

Professor Sen is currently working on a second book on media cultures in South Asia.

“‘It’s All About Loving Your Parents’: Hindutva, Liberalization and Bollywood’s New Patriarch” in Bollywood and Globalization: Indian Popular Cinema, Nation, and Diaspora ed. by Rini Bhattacharya Mehta and Rajeshwari

Cinemas of Africa and Asia

Literature and Cinema in South Asia